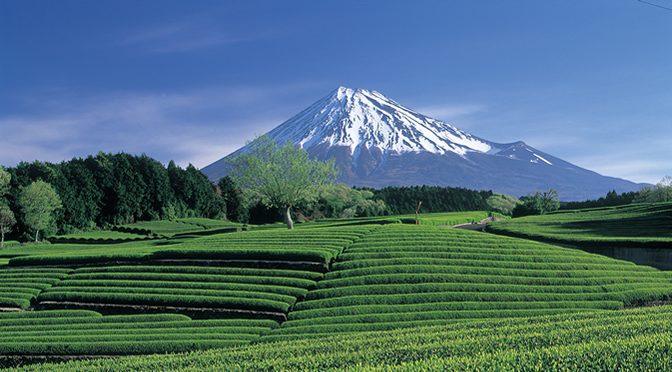 It is said that the origin, a bait cage made with bamboo higos that Ieyasu Tokugawa ordered for falconry. 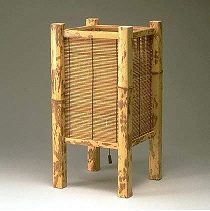 The origination of Suruga Bamboo Ware dates back to the early Edo period in Shizuoka, which holds Toro Ruin of Yayoi period where bamboo baskets were discovered. It has been said the origin was a bait cage made with bamboo higos for the use of falconry that Ieyasu Tokugawa ordered after he retired and living at Suruga Castle as the great old man. Later, in Tempo 11 (1840) or around, when Ichiga Suganuma, the feudal lord of Okazaki, Mikawanokuni (east part of Aichi today) stopped over Shizuoka, he stayed at Hanaya and taught the son Ihe-e Shimizu the bamboo craft techniques. Ihe-e Shimizu then created his products like insect cages and cake boxes in more precise style than ever and promoted the name, while nurturing his apprentices. In Meiji 6 (1873), Suruga Bamboo Ware was placed on the show as a Japan’s special local product at the International Expo held in Vienna, and this attracted great interests. Since then Suruga Bamboo Ware has kept its position as one of Japan’s representative exporting products and gathered much attention from overseas.

Nicely fits interiors of modern houses, the color increases its moral tone across the ages. 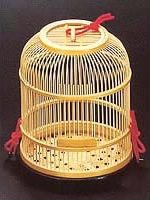 Differently from those from other regions, Suruga Bamboo Ware is produced by bending Sensuji Higos, thousands of thin strands of bamboo with rounded sectional shape, and by having them assembled into a bamboo ring. Once you take the product, you will feel warm and soft texture of the Maru-higos. A wide range of products are offered, from those we are familiar with in our life such as flower pots, cake boxes, handbags, insect cages, lamps, folding screens, bookmarkers, to specialties we can enjoy sensing different seasons such as wind bells. All of those nicely fit interiors of modern houses. Another delight you can enjoy is that the color becomes aged with moral tone as it goes through time.

How to Make Suruga Bamboo Ware

Putting Maru-higos into a body, and make them assembled by a unique method called Tsugite.

The characteristic of Suruga bamboo ware is the thin round bamboo higos making. First, I will make these higos.
Cut bamboo material into pieces while measuring it with a scale, peel the skin, and make a pair of splits in a longitudinal direction using Kowari for width required. Then trim the thickness by using a tool called Sendai, heat them, make rings, and get them cooled. Also, prepare Maru-higos by getting the strands go through holes on a steel plate. Sizes of the holes are from small to large, and the work is done from larger to smaller to obtain finely rounded higos. After that, make dozens of higos heated by iron and bent, put holes on the ring to accommodate higos coming in. Lastly, get the all assembled by a Suruga Bamboo Ware’s particular method called Tsugite for complete product. 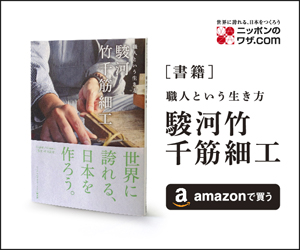 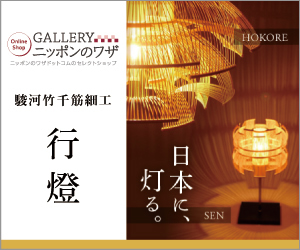 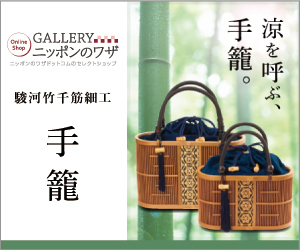